skip to main | skip to sidebar

Fr. Lillard was ordained in Lincoln, Nebraska last Saturday. Today in San Diego, at St. Anne's Parish (which exclusively does the EF form of Mass) Father Celebrated his first high Mass. I culled some of the clearest shots of the Mass and reception which followed. [Earlier in the week Father also said some of the low Masses. Towards the end of the slide show, Fr. is pictured with his mother, Jackie Lillard, who is a member of our parish.

Congratulations to Fr. Lillard and his friends and family and the prayerful support of the parish. I have yet to meet a priest belonging to the Fraternity of the Society of St. Peter who doesn't show extreme zeal and love of God and his people.

The society is filled with men with true joy of the priesthood, and I expect Fr. Lillard will be no exception.
Posted by gemoftheocean at 10:37 PM 3 comments:

From the late 40s to the early 70s in the USA there was a magazine published for grade school kids called "Treasure Chest" - it was essentially a comic book for Catholic kids -- it had articles of general interest, stories and a lot about the faith. They did a few series over the years on the Mass, the general listing of all those articles is at this link -- but I thought I'd make it a little easy to get to the first page of the actual comic book for each part of the Mass. I think the 60s version is probably the most complete series, but it's worth looking at the other articles, so I've interspersed them.

I'll make the direct links a little easier for you so you won't have to do as much clicking and can go to the first page of the graphic. I have put a little * in front of the parts of the Mass that are variable from day to day (although the preface is either seasonal or changes for a special feast day) -- so if you are new to following the Latin Mass - know that you'd flip to a different page for these propers -- no big deal, as a general rule you don't have to mark more than two extra places in your missal.

I suggest if you are new to trying to follow the latin Mass -- just read all these variable parts BEFORE the Mass - if you go on a Sunday, the Epistle and Gospel will be re-read in the vernacular - so don't trip. If you go on a weekday Mass and you don't have a Daily Missal, if you ask beforehand someone can tell you the epistle and the Gospel. Some places will ALSO read these at a daily Mass in English, some not. Some lucky people might even have the main reading's book, chapter and verses printed in the parish bulletin, so if people bring a little new testament they can look them up before Mass, or read them at home beforehand. (hint for the Amazing Father G. of St. Anne's Parish in San Diego.)

The parish will likely have a version of a missalette that has all the prayers in English/Latin (or English/Spanish as the case may be) There are little pictures on the side, so you can tell where you are. The priests are slavishly accurate about following the rubrics ["rubrics" is a fancy word for rules, the word itself means "the stuff in red" - in other words the instructions - so there will be no cartwheels or liturgical dancing] , so if you position yourself up front, and to the SIDE (i.e. AWAY from the center), you can even see the chalice on the altar the whole way through so you can take note of the position of father's hands and follow the rubrics and where Father is, even though he may be "silent" -- after about 2 or 3 masses at most - Unless you've NEVER been to a Catholic Mass - you should be able to follow the Mass without getting lost.

Even though the articles were written for children, there is a lot of historical information in them that even an adult would find interesting. And because "Mass is Mass" even if you NEVER intend to go to a Latin Mass, you'll still learn a lot about this history of the parts of the Novus Ordo Mass (anything after Dec of 1969) - a lot of the prayers in the NO Mass were shortened (especially the Offertory and the Canon) and there are multiple options given now (for beginning of the Mass), the NO Mass offertory prayers are greatly truncated, and there are multiple options for the Canon now, but all the same you'll be able to follow the flow without trouble if you take about 15 minutes to explore the Latin Missalette provided BEFORE the Mass. Again, SIT UP FRONT AND AT THE SIDE - for your first few Masses at least until you are comfortable with what is going on.

The full text of the latin Mass for the ordinary parts (i.e. the parts that don't change) is here.

Judica Me (psalm 42) - Sept 21, 1948 -- (Judica me means "Judge me" - this is one part of the Mass that was dropped with the Novus Ordo. -- it is skipped from two Sundays before Easter Sunday until Easter. [The reason? According to Jungmann, the theory is that when the priest asks "why am I so sad?" It's to keep people from saying to themselves "could be all these darkly drapped statues, that would be your first clue, Father...."])

*The Introit - Oct 13th, 1960 - (on a week day Mass this is would correspond to the verse that would be read at the beginning of the Mass in the Novus Ordo)

*The Collect - Nov 24th, 1960 - (This would correspond to the opening prayer - i.e. the prayer said just before the people sit down in the N.O.) Note: in the 60s the max. number of collects the priest's would say was cut down to 3 maximum, prior to that more could be said. The number of collects, secrets, and post communions is always the same. I.E. you wouldn't have 1 collect and 2 seuquences, for instances, so however manyh collects the priest says, that's how many secrets and post communion prayers he will say.

*The Epistle - Dec 8th, 1960 - (As a rule of thumb, there was one reading before the gospel, but not always, sometimes there can be many readings, like on the ember Saturdays, for instance)

*The Gradual, Alleluia, Tract, and Sequence - Dec. 22, 1960 (the gradual would correspond to the psalm said between the two Sunday readings in the NO)

The Lavabo and *The Secret - Feb 16th, 1961 (the Lavabo is the washing of the fingers and the word "Lavabo" means "I will wash" -- the "secret" is a short verse the priest still says to himself just before the preface)

[for some unaccountable reason, there really isn't any article on the tail end of the canon and the Our Father, go figure - but there may be an article elsewhere, if/when I find it I will insert it here.]

*The concluding Prayers & Dismissal - May 15th, 1961 - (The N.O. dropped the last gospel (the beginning of the Gospel of John, and the Leonine Prayers - the Leonine prayers were said only after a low Mass, the Leonine prayers were said in Latin, this link doesn't tell you much about the latter two. The short little "Placeat" prayer the priest says to himself is worth looking at in the missal, I don't think it has an equivalent in the NO Mass - unless the priest is saying this to himself.)
Posted by gemoftheocean at 7:16 PM 3 comments: 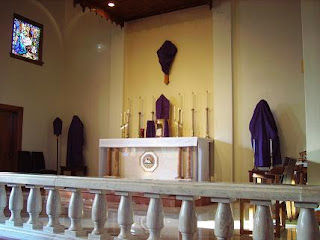 This is pretty much all the "centering prayer" I need right now.
I'm really starting to feel physically better with a lot more energy this last month and a half.
I think I'll just pick up from today, rather than "review" the days I missed. I don't want to miss all the good stuff like Holy Week.
Tommorrow, we're going to have a high Mass for the Annunciation. Can't wait.
A real full bore High Mass too. Have to admit I wouldn't want to go to one of those every Sunday, but every now and again for a real special occasion, it's a treat.
Posted by gemoftheocean at 6:09 PM 1 comment:

Labels: How to do centering prayer the right way

Eenie meanie chilly beanie the spirits are about to speak

A headline in the Daily Mail caught my eye this morning. It said That a dog had chaced a seagull off a 300 foot cliff and the dog had survived the fall. My first thought was "English Springer Spaniel."

It was. There is nothing as single minded as an Springer.
Posted by gemoftheocean at 6:48 AM 2 comments:

Am just now starting to feel somewhat better after last weeks in and out nausea. Will be better to post soon. Just laying out all the ones I want to do!
Posted by gemoftheocean at 3:49 PM 1 comment:

More later today. Yesterday I attended a [semi--!!!] Rorate Mass before the crack kof crack plus also a High Mass for a priest... More on those later, with a post to come about Guadalupe too, and more about Gaudete. Off to Mass shortly, sorry for the delay -- was too bone tired to post yesterday, I went to dinner about 4 then hit the wall and crawled to sleep.
Posted by gemoftheocean at 9:11 AM 1 comment:

Labels: The Paulse that refreshes

Somewhere between the 20s and 1948 "the powers that be" stripped St. Damasus of his very own Mass. Right now, St. Damasus has the plain vanilla "Si diligis me...." Mass. Not even any special Commemorations.

The Alleluia was similar, but not quite the same as that Mass.

HOWEVER, the Collect, Gradule, Offertory, Secret, Communion and Post communion propers were "his own."

the Credo was said, and the Preface used was that of the preface of the Octave of the Immaculate Conception, which would have been the Preface for the Virgin, Mary.

I remember, last year running across a few historical quirks like this. I suspect, from my comparison of my 20s hand missal to the 48 and '62 missals, a lot of number of set Masses got conflated and or truncated.

I'll update this post a little later after work today. For each month of the year, I'm planning to put up a spread sheet of such changes.

Whatever prompted the powers that be to dink with this?

I will update this post a little later to give you the old propers to give St. Damasus his due!
Posted by gemoftheocean at 12:09 PM 1 comment:

Live Free, or get Stomped to Death!

gemoftheocean
Right minded woman on the left coast, until recently. Catholic. Conservative. All American. Who could ask for anything more?